Coldcut is an open-source installer and launcher for AIDungeon on your Windows desktop. 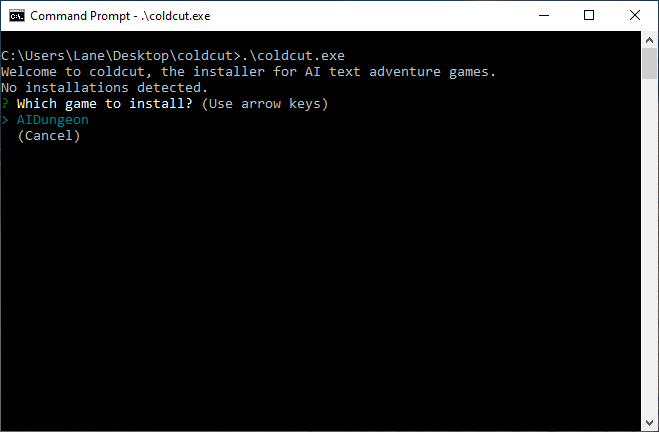 Running AIDungeon on your desktop can be a complicated experience. There's prerequisite software to install, such as Python and Git, and putting everything in the right place can be confusing if you're not a software developer already experienced with these tools. Even developers struggle with installation due to tight versioning requirements on Python that may conflict with the tools they already have installed.

Coldcut handles all of that complexity of your behalf: 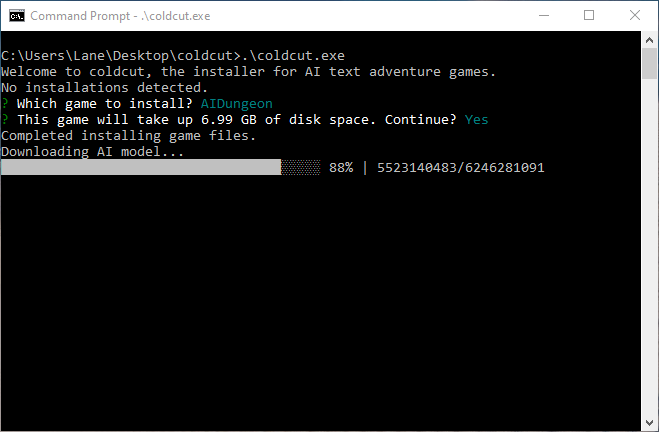 Many people play AIDungeon through Nick Walton's web and mobile apps. Many others play through Google Colab. These methods offer the most responsive experience since you're guaranteed to be playing on a sufficient GPU.

However, I prefer certain features that the vanilla AIDungeon doesn't have, such as the ability to set your own contexts. Thus I almost always play one of the forks. While I frequently play on Google Colab, I find the notebook interface annoying and inconsistent.

Playing locally gives me the flexibility to play whatever fork I want, with a better UX than Colab. It's a more consistent experience overall. I don't have to worry about scaling issues or random disconnects affecting my session. (Alas, I play on CPU-mode since my GPU doesn't have sufficient VRAM. It's definitely slower.)

One caveat: if you want to run AIDungeon on your GPU, and you have one that can handle it (Nvidia with 12+ GB VRAM), you'll need to install the Nvidia CUDA and cuDNN libraries yourself. Coldcut can't install these for you today.

Right now I'm in the process of adding a couple of the popular AIDungeon forks to Coldcut. Expect them in the next release.

Try out Coldcut, and let me know your feedback!

Reach me on Twitter, or file an issue on GitHub.